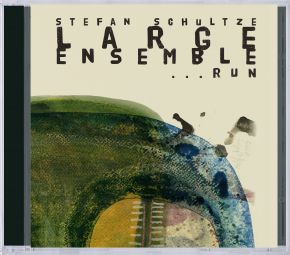 A man beyond categories: German Stefan Schultze plays piano in his own Stefan Schultze Trio as well as in the Octoposse octet. He teaches kids at schools in jazz and improvised music with his mobile project School Jazz is Cool Jazz. With his multimedia project Raw Rough Ready, he combines music with dance and video performances. And now: the Stefan Schultze Large Ensemble! This is probably the most logical step in the still young, but quite diversified career of Stefan. It's adventurous to set up a big band in these rough times, but Stefan grabbed the chance and formed the Stefan Schultze Large Ensemble. Even more, he himself does not play the piano on the Large Ensemble's debut album “Run” in order to concentrate on composing and acting as musical director. As a result, his band features seventeen musicians ranging from 21-year-old trumpeter Florian Menzel to 66-year-old saxman Heiner Wiberny. Stefan sure has a detailed master plan. He's not just fumbling (and tumbling) around; he knows what he wants and how to achieve it, which has gained him worldwide recognition.