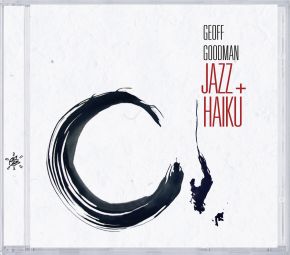 Haiku is a Japanese poetry genre, the strict structure of which contrasts to the often dreamy, often jovial contents. A Haiku is composed of 5+7+5 (i.e., a total of 17) “on”; each “on” corresponds approximately to a syllable in our language. A haiku superficially often has a statement that almost seems banal. Its philosophical significance can only be deemed when the reader or listener deals with it actively and lets his or her thoughts run freely, inspired by the haiku. Geoff Goodman has dealt intensively with haikus and converted them into songs (you might say "refined" them). Jazz + haiku present a real symbiotic unity of the language of lyrics and the language of music.   "Jazz and Lyric" as a type of performance was very popular in Germany about 50 years ago. Manfred Krug was the most well known performer of this in the former East Germany, and Gert Westphal and Peter Rühmkorf read texts against a background of jazz music in West Germany.  However, lumping jazz + haiku with attempts from those times would be totally wrong, because Geoff Goodman has a different approach. His music (an interesting mixture of jazz, songs, folklore and modern classical music) is unique and works precisely due to the link with haiku presentations, regardless of whether recited or sung. Simply the idea of singing Japanese haikus (in English translations) instead of reading them aloud demonstrates the song approach. Other haikus are recited by the Japanese Kiyomi in the original language parallel to the improvisation. The haikus are inspiration for improvisations on one hand here, and on the other hand they are also part of the compositions.

Excerpts of calligraphy specifically created for this project by the artist Eva Sperner are shown in the booklet of this CD. The concept jazz + haiku goes even one step further in concerts and combines the music with projections of this calligraphy.