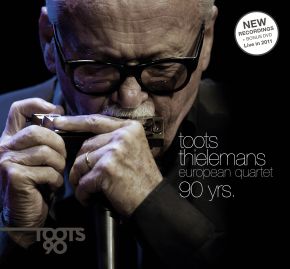 Last spring one of the world's famous jazz icons turned 90 years old!
His anniversary is honored in a very special manner: with the cd 90yrs and a special bonus DVD with a selection of unique material of his last concert in Japan.

This live CD, 90 yrs, contains unique and previously never issued recordings.
The tracks are recorded during the his latest tours around the globe.

Pianist Karel Boehlee, drummer Hans van Oosterhout and double-bass player Hein Van de Geyn support Toots in the passion which is for him like breathing: making music!
To play music the audience is the only thing Toots Thielemans want in his life.
The cd 90 yrs. is a brilliant registration of how Toots still plays for his fans.

The albums opens with the track 'Waltz for Sonny', a bow to Sonny Rollins, is somehow a musical brother of Toots’ most famous tune: Bluesette.
Next track “The Dragon” was written by Toots for the Japanese movie Yasha (1985), a nice, open and mysterious tune. Together with Mitsuhiko Saito he wrote the original soundtrack for that movie.

'Sno' Peas' is originally written by Phil Markowitz and made famous by the legendary pianist Bill Evans. Toots has played and recorded with Bill Evans in the time that he lived in the USA. 'Sno' Peas' has been on Toots’ list of favorites for a long time. An intricate harmonic set of changes, always a challenge.

'One Note Samba' and 'Wave' composed by Antonio Carlos Jobim are great examples of very intelligent, yet accesible writing. Obvious and singable to the superficial ear, and full of hidden details for the specialist. No wonder Toots loves playing these songs, they leave so much space for creativity and personal interpretation, yet remain always very clear in their own identity at the same time.

Dave Brubeck’s “In Your Own Sweet Way” often kicked off the concerts they played over the years. A wonderful vehicle for improvisation with the 8-bar interlude always opening doors to new interpretations.

Toots often mentions his admiration for the greatest jazz musician ever: Louis Armstrong.
When the old harmonica player was just a young boy and heard the voice of Louis Armstrong he completely was infected by the jazz virus.
“What A Wonderful World” is in fact a dedication to this personification of jazz.

Another very challenging harmonic, yet such lovely melodic song was written by Brazilian Luiz Eça: “The Dolphin”.

Toots not only worked with a lot of big jazz artists but also with pop musicians:
In the seventies Toots was invited to join Paul Simon on a long tour. His feature was on the wonderful song, written by Paul: “I Do It For Your Love”. Toots kept it on his repertoire since then.

'Old Friend', the last song on this CD is a very special one. Toots wrote this when he was young; almost like an harmonic exercise, yet so full of feeling. With adding strings by the Shinozaki Strings from Tokio, this is a heartfelt rendition of this special composition that Toots dedicated to his father.

Next Sunday, the 12th, it's Mother's day. To celebrate this day with you we have made a Mother's Day selection for all music loving mothers. We offer a 15% discount on: Valentina Tóth - Hungarian Horizon    Cor Bakker - Elettra Due Shanti Snyder - Cloud 9 Lucia Aliberti - Early  Verdi Arias Toots Thielemans - 90 Years Valentina Tóth "In my parents’ house I often heard Hungarian folk music. I thought it was something truly special. Hungarian ...

from the days at the Boerenhofstede till the Brazilian friends at the Concertgebouw, .....a magician.

Toots Thielemans (artist)More information
20-12-2012 www.jazzweekly.com
"... Mega-veteran harmonica player Toots Thielmans still sounds fantastic as he rounds the corner on his century on this planet."
10-12-2012 Jazz Reviews
"Toots Thielemans was witty and charismatic. He certainly showed the audience that he is still the master of improvisations on the harmonica."