The code is valid one time and valid for a 10 days after receiving the promotioncode. Your emailaddress will only be used by Challenge Records International and will not be given to 3rd party advertisers. If you have any questions please contact us.
TITEL CD is added to your cart.
1346421318 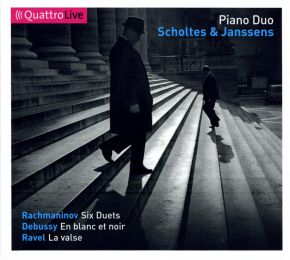 Exhibiting very changeable characters, the "Six Duets" is the most important work for piano four hands that Rachmaninov wrote, but unfortunately, it is not often performed.
Claude Debussy composed "En blanc et noir" - for two pianos - in 1915. It was one of his last works. The title makes reference to the white and black keys of the piano, some passages played entirely on the white or black keys. Yet Debussy was also alluding to the respective characters of the movements. The open and energetic first movement and the sparkling third movement (dedicated to Stravinsky) correlate with the notion of blanc, while the dark middle movement represents noir, Debussy having dedicated it to his friend Jacques Charlot who was killed in the First World War. The French composer Maurice Ravel is, like Debussy, also considered one of the most important impressionists in classical music. He often reverted to traditional classical forms, combining these with influences from other musical styles such as jazz and blues and various kinds of dances like the waltz, habanera and bolero. "La valse" is unique and compelling from the very first tremolo to the virtuoso, almost chaotic, end. Renowned for his orchestrations and piano transcriptions, Ravel arranged his original orchestral version for two pianos.

The Scholtes & Janssens duo is well known for their brilliant sound and marvellous technical skills, presenting very intense and energetic performances. They do this with the beautiful works of Rachmaninov, Debussy and Ravel on this Quattro Live debut!