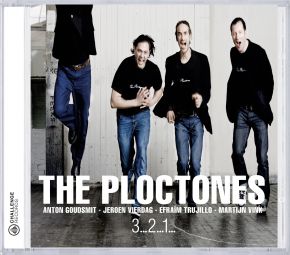 The four-headed monster is back! After the success of the Challenge-debut "050" The Ploctones are back to surprise us with their intense musical energy. This energy is contagious. The band was ready and very eager to present their 3...2...1..-album to the audience and they did with the smashing cd presentation concert in De Melkweg in Amsterdam on May 14th 2011.
The band has a new drummer: Kristian Krajncan (!) who steps in the footsteps of Martijn Vink. During the presentation concert in Amsterdam, Krajncan also played on the violoncello in the supporting program with dancer Besim Hooti! He is not only a sublime drummer with the same energy and drive in his drumming as the other Ploctone-members, he also has more faces!

See The Ploctones in a video of the Dutch popular daily television show called De Wereld Draait Door (DWDD). The band made their appearance in the show in 2010 when Anton Goudsmit also received the prestigious VPRO Boy Edgar Award!