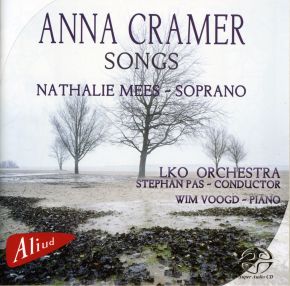 Anna Cramer was born in Amsterdam on July 15th, 1873. She studied at the Conservatory of Music in Amsterdam, and on her graduation in 1897 she travelled to Germany to study composition with Wilhelm Berger and Max von Schillings. She enjoyed some early successes, and in 1906-07 several of her songs were performed in The Netherlands and Germany. Between 1907 and 1910 her songs op.1 – 4 were published in Germany.

From 1910 until 1925 Cramer lived in Munich and Berlin, but at the end of this period she moved to Vienna. This proved to be important for her development as a composer, for while in the Austrian capital she worked closely with folksinger, poet and composer Walter Simlinger. He wrote the libretti for her two operas, Der letzte Tanz and Dr. Pipalumbo (1926-1927).

Cramer suffered recurrent money and health problems and in 1930 she was committed to a mental institution. After her release in January 1931 she returned to The Netherlands but withdrew entirely from public life, avoiding all contact with other Dutch musicians, and no more of her songs were published in her lifetime. However, she did not stop composing and over the years she also revised several of her earlier songs. In 1958 she deposited a suitcase full of manuscripts at a bank in Amsterdam.

Her mental health problems persisted and she was forcibly hospitalised once again in 1960. She remained in a nursing home until her death on June 4th, 1968 at the age of 94. The suitcase containing her manuscripts then came into the possession of the Haags Gemeentemuseum, and nowadays her compositions are kept in the Nederlands Muziekinstituut in The Hague.

The time she spent in Germany and Austria brought Anna Cramer into close contact with the latest compositional developments of the day. Her songs are products of German romanticism, although she created her own distinctive style. Despite not being avant-garde by the standards of the early twentieth century, Cramer was capable of writing passages of striking modernity. She felt her debt to Wagner and Strauss, and acknowledged the influence of Mahler, Wolf and Berg, but also incorporated features of folk music and cabaret into her songs. It would appear that Cramer often composed with an orchestra in mind, and Jeppe Moulijn’s orchestration of her Sechs Lieder, op.4 is a natural step forward in the exploration of her oeuvre, which is still widely unknown.