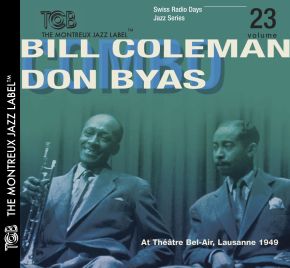 This album must be regarded as a legendary document of jazz! Legendary because it dates from the year 1947, a period not yet popular for jazz live recordings from Europe. Trumpeter Bill Coleman was then offered a European tour featuring US jazz musicians on one of they’re first post-war II appearances. Coleman had teamed up with saxophonist Don Byas, vocalist Pops Whitman plus five French musicians being available for such venues.

Coleman’s choice of titles reflects a shift of then up to date standard tunes to well known older ones fitting his kind of suave, mellow and sensitive interpretations moving between traditional and more modern improvisations. Musical 1947-actuality is presented by tenor saxophonist Don Byas, often part of the famous Minton playhouse jam sessions in New York, adopting this new style of exciting new jazz called bebop. He states his position as the younger breed of musician’s role model on tenor saxophone and does this by brilliant playing. It is very interesting to remark the degree the five Frenchmen had already reached absorbing the new style of jazz. Whereby all five keep abreast of things, de Villers Hodges-like playing is constantly interrupted by bebop phrases. Vibist Daly definitely remains a Hampton disciple. The rhythm section though moves with changing efficiency but very decisive on to new goals. 63 years ago this kind of jazz was hip, the difference to now is enormous and can be well observed by listening to this live recording.