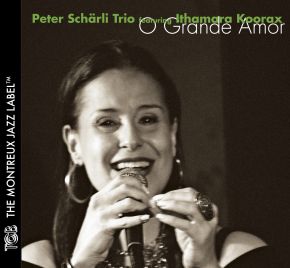 Ithamara Koorax, the Brazilian lady singer has teamed up with Swiss trumpeter Peter Schärli who himself demanded the cooperation with pianist Hans Peter Pfammatter and bassist Thomas Dürst to be able and fit to form a strong and supportive trio for the vocal artist. What has finally resulted in this group effort appears less like a singer accompanied by an instrumental trio, but as an obviously seldom-heard but amazingly promising formula for a quartet.

Even though totally in command of things, Mrs. Ithamara Koorax delivers her duty within the group and not above the accompaniment, which lends a very special and intense flavour to the interpretation of the music. Notice her impeccable intonation, her almost vibrato less, but just the same emotional and flexible delivery of each and every title as well as her ability to submerge her talent as well as her wide range into the feeling of the group. Which shows being all the more delicate and demanding, because the four work in the absence of a drummer, a usually most important element of Brazilian music.