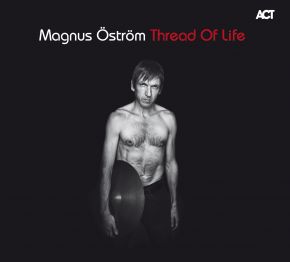 “ ‘Thread of Life’ is the energy that keeps everything alive and also gives me the spark for my music. But we have to be aware that it is only a thin thread that can be cut off any minute, so we better take good care of our time here on earth and the people around us and of course also the environment that surrounds us.” This is how drummer Magnus Öström explains the title of his first album as a leader on ACT. How wound the thread of life can be and how happiness and suffering can be entangled, are experiences that Öström has dealt with on this album.

As its drummer Öström experienced how e.s.t., Esbjörn Svensson Trio, rose from among unknown bands competing for club gigs to one of the most influential and successful jazz ensembles of the last decade. But he also experienced the sudden end of all dreams when his friend and bandleader Esbjörn Svensson tragically died in an accident two and a half years ago. With ‘Thread of Life’ he has faced the challenge to preserve the musical legacy but also to follow his own path – as a composer, arranger and producer. “I needed to do it that way to show what my musical universe is all about. Also because I really love composing and being in the studio producing.”

Already the song titles ‘Weight of Death’, ‘The Haunted Thoughts and The Endless Fall’ or ‘Between’ imply that this is not just any album. Although e.s.t was a truly democratic band, – Öström recalls that “in the end all three of us always worked on the arrangements of Esbjörn ́s melodies, so depending on the song mine or Dan ́s input could be substantial” – simply continuing without Esbjörn and his compositions was unthinkable for Öström. Joining up with an old friend, sound engineer Janne Hansson, he began to shape the compositions that he had written after the dissolution of e.s.t.. He asked Andreas Hourdakis (guitar), Gustaf Karlöf (keyboards) and Thobias Gabrielson (bass), all leading musicians in the music scene in Stockholm, to join in. “I couldn’t have asked for a better line up to record with,” Öström says.

Although Magnus Öström’s distinctive grooves and circular way of playing with the dynamics make you think of e.s.t., ‘Thread of Life’ still sounds fundamentally different. Öström focuses on sounds instead of melodies. The extremely diverse electronic effects, vocal parts (‘Alifia Mi’) and different guitar sounds, at least in the up-tempo songs, are closer to art rock or jazz rock than they are to e.s.t.. If e.s.t. was a pop band playing jazz, as Esbjörn once said, then Öström’s project could be described as a rock band playing jazz. Colourful, gripping and convincing through the continuous involvement with its own musical origin.

The threads of end and beginning merge into another, and therefore it is logical that Öström’s new music is arranged around a very special song that is the centerpiece of the album, namely his ‘Ballad for E.’ ”When I composed ”Ballad for E” I already had a perfect line-up for this song in mind. I could have recorded it with my new band as well, but I felt that this song demanded those exact persons: Magnus Öström on drums, Dan Berglund on bass, and Pat Metheny on guitar. Pat was one of very few musicians ever to join e.s.t. as a guest to perform with us live on stage, and there was and still is huge respect for each others’ work. So when I asked him, he immediately said ’yes’.” Magnus, Dan and the former e.s.t sound engineer Åke Linton went to the Avatar Studios in New York with Pat Metheny and recorded the song. It is the highlight of the album as well as a lasting tribute to his lifelong friend and musical companion Esbjörn Svensson.