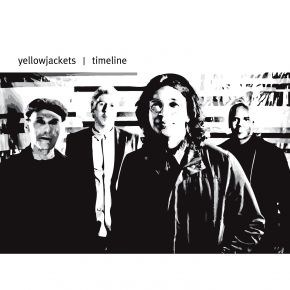 For longtime Yellowjackets fans, the new album arrives as a confirmation and extension of the high expectations for this band. For new listeners, it's an ideal introduction. Timeline is the band's 21st official recording not including special side projects and guest spots. The band's background gleams with various honors, including 17 Grammy nominations and two Grammy awards to show for their efforts - so far.

As Haslip explains, "We get extremely engaged with every project and we try to elevate and open things up. That's always the goal with every project. I'm not saying we always succeed. But the focus is to always try to do something that is hopefully engaging. And being that Russell, myself and the guys in the band have a certain chemistry." He adds, with a laugh, "It's not easy to accomplish this after thirty years."
Musically, the terrain on Timeline is characteristically diverse but also cohesive, melodically accessible and also gently experimental, in keeping with the Jackets' concept for three decades. Beautiful balladry, such as Ferrante's "Indivisible" and Mintzer's "My Soliloquy," intertwine with modern-day variations on traditional swing themes, on Mintzer's "Like Elvin" (also one of the songs featuring a new sound for the band, guest trumpeter John Diversa) and Ferrante's "Numerology." Kennedy's one composition, "Rosemary," explores an inventive rhythmic-melodic feel, with its lyrical balladic melody laying atop an exotic drum groove. And roughly in the middle of it all comes the slinky-funky Ferrante-Haslip tune "Magnolia," originally written during the time of the 2008 album Lifecycle, but coming fully to light here. And as it happens, that song becomes a great vehicle for another strong historical linkage in the band's history, as guitarist Robben Ford makes a rare cameo on record, with a spicy wah-wah-fied guitar solo. This is Ford's first appearance on a Yellowjackets album since 1994's Run For Your Life, engaging in easy dialogue with the band he half-accidentally launched.