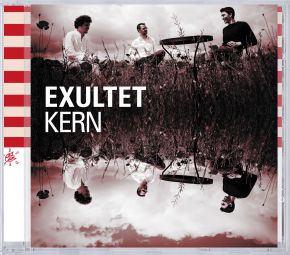 Exultet is a young, French trio with the unusual combination of instruments accordion, e-guitar and drums, who first appeared in Germany within the context of Burghausen Jazz Week 2010. And then they won the next-generation prize right away.  'Jazz Zeitung' wrote about the performance of Exultet there: 'The music of this trio is as unusual and at the same time fascinating as the composition of the group members. The idea to mix tones and style elements of French chansons with jazzy-rocky e-guitar sounds and then to present this all in unbelievably cleverly syncopated and at the same time rousing groovy rhythms is unparalleled.'
The band members of Exultet describe themselves and their music as an isosceles triangle. The music is at times a wild, at times a gentle conglomeration, in which jazz is of course included, but the basis of which represents avant-garde rock to the same extent (as it was and is cultivated in the rock-in-opposition movement). Other influences range from tango and musette to dark metal and noise music. Consequently, it is that much more good news that the guardians of jazz are reaching out to Exultet without prejudice before the prog and rock groups become aware of them and claim the trio exclusively as one of their own.
Actually, it is hard to imagine that the result of this comprehensive fusion of styles can sound so marvelously homogenous and original. But the exceptional trio Exultet has really succeeded in doing this fantastically, which is certainly also due to the complete equality of all three musicians. The French word for being exultant is 'exulter'. The trio played with this verb at selecting this name. Not a bad idea.