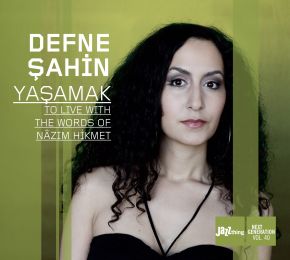 The formerly divided German capital is special in many ways. For example, Berlin provides a remarkable example of the coexistence of different international cultures, among other things with its the annual, colorful parade "Carnival of Cultures". Among other things, the reason for this lies in the high share of Turks and people of Turkish origin, who enjoy living in Berlin. Defne Sahin is one of these Berliners. Luckily, Defne _ahin does not limit herself on her debut album Ya_amak to exploring the apparently logical points of contact between two cultures. Instead, she proves that she is really multicultural against the background of her home town. Whoever fears another world music project called "Türkiye meets Germany" can rest at ease. The music is more a pleasant mixture of jazz and pop, spiced with oriental sounds and rhythms as well as a touch of Bossa Nova. However, the musical rapprochement of cultures is only one side of the coin.

In the beginning, there was the word. This can remain so, because the singer with Turkish roots, who lives in Berlin, used the poems of one of the most important Turkish poets on this album. Still, it is difficult to classify Nâzım Hikmet solely as part of Turkish cultural heritage, since Turkey in its present form was only founded in 1923 when Hikmet was already an adult.  Hikmet was born in the Greek city of Thessaloniki in 1901 or 1902 and grew up in Syrian Aleppo and in Diarbarkır. He remained attached to his native place his whole life, although he was expatriated due to his active membership in the forbidden communist party, among other things, and consequently lived many years in Moscow, i.e., until his death in 1963. The lyrics of Ya_amak, the title song, correspond to the last verse of Hikmet's famous poem Davet: "To live like a tree in solitude and free and like a forest in solidarity, this yearning is ours." However, you hear this and all lyrics on the CD in Turkish. Defne proves with this how beautiful this language can sound, especially with her strong but touching voice, which clothes Hikmet's words in fine vestments, so that wonderful creations become recognizable, even for those who do not understand the language.