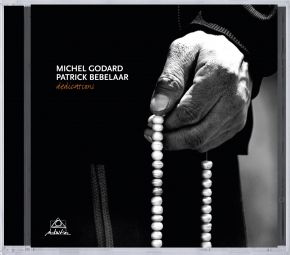 Effortlessness and beautiful sounds, peacefulness and power, transparency and buoyancy… Those are only a few of the attributes, with which you could associate "Dedications" by the duo Michel Godard and Patrick Bebelaar. Or let's reduce it to a catchword: Pleasure! Pleasure topics also seem to have influenced a few compositions on "Dedications". For example, "Archangelika" is nothing other than the appetite for and digestion of stimulating angelica. Or we treat ourselves with "Philtre" to a magic potion, willingly with aphrodisiac effect. Finally, the celebrity chef Vincent Klink gets a comprehensive serenade with "One For Vince". In turn, Vincent gives thanks with the writing of a hymn of praise to the duo, which can be read in the booklet of "Dedications". Excerpt: Both musicians are also unprecedented outside of their careers in music, i.e., they are real connoisseurs in other areas too. Whoever observes them at dinner or in the kitchen senses their vibrant sensuality. As next to last piece, there is an interweaving of two nocturnal classics, the only composition by others on the album. It starts with Monk's "Round Midnight". Godard and Bebelaar then swing into the second part almost unnoticed. "Mbube" is a composition by the South African Solomon Linda from the 1920s. This song became a big hit for the Tokens with the title "The Lion Sleeps Tonight" in 1961.