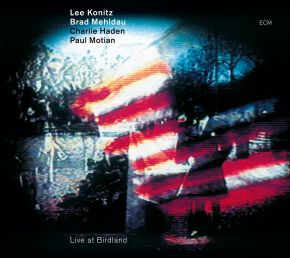 “This week,” reported the New York Times in December 2009, “Birdland has booked an ad hoc quartet with three eminences and a great younger player. (…) It’s going to be a week of soft anarchy, a gig without preparation or rehearsal, despite the presence of recording microphones for a couple of evenings. The jazz musician’s trust in the present moment is elevated nearly to worship among this group’s elders, all of whom, one way or another, were in on the early stages of loosening up rhythm and structure in jazz.”

On this live recording from New York’s legendary club, an ensemble of history-making players dives into the music without a set list. Four exceptional jazz musicians –Lee Konitz, Brad Mehldau, Charlie Haden and Paul Motian - approach the standards from new perspectives and unusual angles. They play them with freedom, tenderness and a melodic and rhythmic understanding found only amongst jazz’s greatest improvisers.

The recording was made at Birdland and mixed by Manfred Eicher and the quartet, with James Farber as engineer, at New York’s Avatar Studios. Songs selected by this team from the performances of December 9 and 10, 2009, are: “Lover Man”, “Lullaby Of Birdland”, “Solar”, “I Fall In Love Too Easily”, “You Stepped Out Of A Dream” and “Oleo”. Konitz has often said that he tries to play the material as if encountering it for the first time. With all four musicians listening intently, discoveries are continually made in the music.

“Lover Man”, the ballad strongly associated with Billie Holiday (but also, for instance, with Lee Konitz and Gerry Mulligan at Newport) makes an arresting opening track, with the uniquely melancholy cry of Lee’s alto sax to the fore. Mehldau’s solo gives immediate notice of his architectural intelligence as a player, and in his subtle comping he continually builds bridges between the idiosyncratic playing styles of his associates. Haden’s bass solo is characteristically soulful, Motian’s deft brushes perfectly placed.

“Lullaby Of Birdland”, composed in 1952, acquires additional poignancy through the recent death of its composer, George Shearing. (Lee Konitz, now 83, is said to be the only living jazz soloist to have played all of the diverse addresses of the Birdland club, starting in 1949.) The piece is driven here by the marvellous rhythmic interplay of Haden and Motian, their near-telepathic understanding honed long ago during their decade-plus association with Keith Jarrett in the 1960s and 70s.

“Solar” begins with an abstract clarion call from Konitz. “Mr. Konitz, with a piece of fabric stuffed into the bell of his horn to mute it, started playing Miles Davis’s ‘Solar’ and Mr. Motian joined in, followed by the others. A skeletal groove emerged…”, wrote Ben Ratliff in the NY Times. Mehldau’s solo is a marvel of invention, lifted up by the waves of Motian’s wayward drums.

“I Fall In Love Too Easily” is a touching rendition of the Jule Styne ballad (a song first intoned by Frank Sinatra in 1945) with fine outlining of the melody by Mehldau, and Konitz almost Ornette-like in his phrasing. The singing quality of the performance is extended in Haden’s heartfelt solo.

“You Stepped Out Of a Dream” was previously recorded by Konitz, Mehldau and Haden for a Blue Note trio album 1997: the powerful presence of Paul Motian on the present recording transforms it completely.

Sonny Rollins’s “Oleo” is given one of the freest performances of the set, beginning with a beautifully elastic Konitz/Motian duet. Brad Mehldau has commented on the performance’s cool chromaticism, allied to the rhythmic phrasing of bebop, until the tune is deconstructed in the final moments of collective soloing.   When these musicians play the standards, they do indeed make them new.

All of the musicians have some previous ECM history. Konitz contributed to Kenny Wheeler’s classic Angel Song in 1996, while Mehldau played on a pair of Charles Lloyd discs, “TheWater Is Wide” and “Hyperion With Higgins”, drawn from an inspired session in December 1999.

Haden’s and Motian’s associations with ECM go back almost to the beginning of the label’s history. Haden’s first ECM appearance was in 1972, as a contributor to Motian’s “Conception Vessel”, Paul’s first album as a leader. Both men recorded for ECM with Keith Jarrett’s American Quartet (the epic “Survivors’ Suite” and “Eyes of the Heart”). Haden’s also been heard on ECM with Pat Metheny, Denny Zeitlin, Carla Bley, and the much-loved “Magico” trio with Jan Garbarek and Egberto Gismonti. He’s also led his own large ensemble on Ballad of the Fallen (also with Paul Motian). Last year, after a longer absence, he returned to the label with a series of duets with Keith Jarrett: “Jasmine”.

Paul Motian’s considerable ECM discography as leader of his own groups includes a series of highly acclaimed albums by the trio with Bill Frisell and Joe Lovano, as well as a recent recording in trio with Jason Moran and Chris Potter, “Lost In A Dream” Motian has also drummed on a wide range of other albums for ECM – with Paul Bley and Gary Peacock, Enrico Rava, Bobo Stenson, Arild Andersen, Marilyn Crispell, and more.