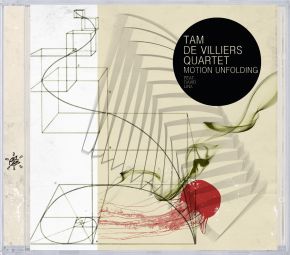 Complex simplicity: when something like that happens in music, it can really challenge a listener. He immediately recognizes clear structures, only to have them broken and put into question shortly thereafter. Such is the case in "Motion Unfolding", the new album by the Tam de Villiers 4tet. This music requires focused attention. Then the idea is suddenly revealed, becomes an entry – at first only a crevice, then increasingly wider – and opens into de Villiers' world.
The melodic and grooving elements continually change their dimensions in the same way as the complex and dense portraits in sound, similar to a lava lamp on adrenalin. The result is somehow jazz and sometimes progressive rock too. And sometimes it is something that floats and drives and irritates. It is so irritating that it finally defies any reasonable categorizing in the end. You simply cannot brush aside this music. Whoever yearns for adventures should delve deeply into this music, listen to it many times and perhaps discover a completely new, separate cosmos.
The quartet is entering the fifth year of its existence with the same band members. The musicians have developed such mutual familiarity playing live and in studio during this time that each individual stands out and at the same time is the part of the sum total, the 4tet sound, with equal rights.