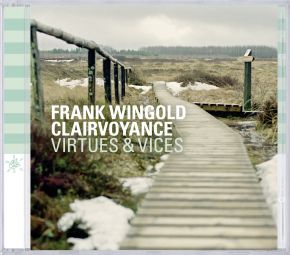 Frank Wingold Clairvoyance provides a soothing immersion in sound for body and spirit in his current album "Virtues & Vices". It is not a question here of an emotional roller coaster going from one extreme to another, but instead of the attracting pole of a magnet.
For example, you sometimes think that you hear the saxophonist Niels Klein not only playing, but also breathing, so directly "humanly"  conceived and implemented is the music of Frank Wingold's band Clairvoyance. But this impression, even though intentional, is only part of the truth. Nothing is left to chance in this music, but instead everything is structured down to the last sound. If Wingold and his comrades-in-arms were French, you could assume a bastard produced from a menage à trois of Jacques Thollot, Maurice Ravel and Charles Trenet. The love of the tricky rhythms of Thollot, coupled with the melodic sounds of a Trenet reduced to the essential and willingly with a wink of the eye, and the multi-colored, rich instrumentation of a Ravel sprout from all roots of "Virtues & Vices".
Frank Wingold himself often emphasizes that he has been influenced by the North American guitarist Jim Hall. His guitar style creates more of a template for the US guitarist with a rapport to a lot of European chamber music on one hand, and on the other hand is more influenced by South American than North American music if at all. The piece "Some Son Song" is an eloquent example of this.
What do we want to say with that? Only that Frank Wingold refutes us every time with Ensemble Clairvoyance – named after his first solo album – when we suspect that a comparison with that known would be appropriate. Even if certain memories are called to mind, "Virtues & Vices" is completely independent if not style-setting for possible (or let's just simply say: hopefully) future imitators. Worldwide.

Niels Klein became a member of BuJazzO in 1998 right at the beginning of his studies in saxophone and composition/arrangement at Cologne Music College and then changed to the group Heavytones, Stefan Raab's backup band in the show TV Total, where he remained until 2009. Then he took over the artistic direction of BuJazzO and the NDR Big Band. He is a professor for jazz composition/arrangement, aural training and theory at the Institute for Music at Osnabrück College.
Jonas Burgwinkel, born in Aachen, already started his studies at the conservatory in Maastricht when he was 17 and continued his studies at the Berklee College of Music and Cologne Music College, among other places. In 2009, he received the WDR Jazz Prize for improvisation and is currently considered one of the jazz musicians most in demand and most active of his generation in Germany.
The instructor for jazz contrabass at Cologne Music College, Dietmar Fuhr, has already played with big names such as Enrico Rava, Richie Beirach, Dave Liebman, Danny Gottlieb, Nils Wogram, Billy Elgart, George Garzone and Leszek Sadlo. He can already be heard here on his third Double Moon Records production with his impressive and precise bass playing