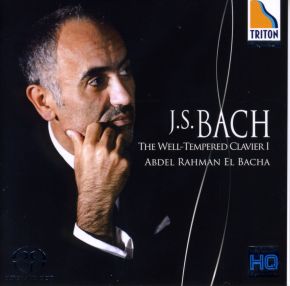 The Well-Tempered Clavier Book I

“Bach’s tendency to compile encyclopaedic demonstrations of his art is exemplified by his two books of 24 preludes and fugues in all the major and minor keys, known by the title of “The Well-Tempered Clavier” (Clavier or Klavier simply meaning “keyboard”). The “48”, as the two books together are often called, represents a continuation of a strong German tradition of fugal writing for keyboard, but also a codification of the idea of pairing a freely composed prelude with a self-contained fugue, and of the principles of fugue. The essence of these is a strictly contrapuntal texture in a consistent number of parts or “voices”, albeit freely distributed between the hands, and a concentration on a main theme or “subject” which is introduced in a gradual build-up in all the voices in turn, usually in combination with an almost equally important “counter-subject”.

The two sets were intended primarily for use in Bach’s teaching of keyboard playing and composition, and were not printed in full until more than half a century after the composer’s death. But manuscript copies were widely circulated, and were avidly studied by Mozart and the young Beethoven. Later, the “48” was a significant influence on many other composers, including Robert Schumann, who considered it a musician’s “daily bread”; and in the twentieth century it provided a model for similarly comprehensive sets of preludes and fugues by Hindemith and Shostakovich. Meanwhile, although conceived for the harpsichord and possibly the clavichord, it has become a central part of the repertoire of the ubiquitous keyboard instrument of the nineteenth and twentieth centuries, the piano.

Book I of “The Well-Tempered Clavier” took shape gradually during Bach’s years as Kapellmeister (director of music) at the court of Coethen. It seems to have begun with two series of preludes in the Clavierbuechlein, or “Little Keyboard Book”, that Bach wrote for the education of his nine-year-old son Wilhelm Friedemann in 1720. Soon after that, he paired these preludes with fugues and added further pieces, the new material being either newly written or adapted (and perhaps transposed) from now lost earlier versions. He then expanded many of the preludes as part of a revision of the whole set, which took place probably in 1721 or ’22. He made more revisions in the process of producing a fair copy of the whole work in late 1722 or early 1723; and after his move to Leipzig he continued to adjust details right through to the 1740s – by which time he was also working on the companion Book II.

One model for Bach in his assembly of Book I was Ariadne musica by Johann Caspar Ferdinand Fischer, a 1702 publication consisting of twenty short preludes and fugues for organ in ascending order of key, major and minor. Fischer left out a few keys which in the most common tuning systems of the time would have sounded impossibly out of tune. But Bach was able to fill in the gaps, counting on the use of a more up-to-date system which evened out the compromises inherent in the division of the octave into twelve semitones: perhaps today’s equal temperament, but perhaps a “well-tempered” tuning which retained some of the individual colour of each key. “
(From the CD linernote by Anthony Burton © 2011)