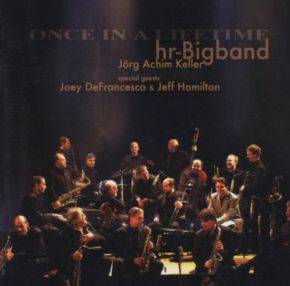 Once In A Lifetime

German big bands often garner their performances with outstanding American soloists. Here, the hr-Bigband had the brilliant idea to call upon premier organist Joey DeFrancesco and widely renowned drummer Jeff Hamilton. Ever since the great Jimmy Smith left the scene, Joey DeFrancesco remains the one virtuoso of the Hammond B3 organ, having played with Shirley Scott, Jack McDuff, Jimmy Smith, and on Miles Davis’s Amandla. Jeff Hamilton, one of the most versatile drummers in the U.S., has played with such diverse configurations as the L.A. Four, Woody Herman, the Philip Morris Big Band, and the trios of Monty Alexander, John McLaughlin, and Diana Krall.