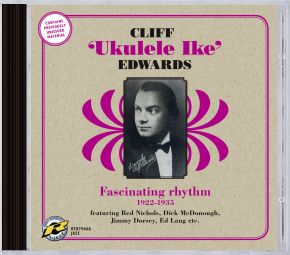 The first thing that needs to be said about Cliff “Ukulele Ike” Edwards is that, contrary to all information published in books and discographies, he did NOT play a Kazoo. Those trumpet-like sounds that he made (somewhere between “scat” singing and yodelling) were produced vocally with no help from any sort of instrument, however primitive. He called it “eefing”. There has been surprisingly little critical appraisal of his work. When one considers that in a career that lasted from the 'teens to the '60s he made close to 200 records, including several major hits, more than 70 movies and had a TV series, it's a record that few artists could even begin to match. How many people today who watch Walt Disney programmes on TV realize that the voice that sings “When You Wish Upon a Star” at the start of each Buena Vista presentation is that of Cliff Edwards? (part of the linernotes written by Chris Ellis)

More than any other performer Edwards was responsible for the soaring popularity of the ukulele in the 1920s. Millions of ukuleles were sold during the decade, and Tin Pan Alley publishers added ukulele chords to standard sheet music. Edwards always played American Martin ukuleles favoring the small soprano model in his early career. In his later years Edwards moved to the sweeter, large tenor ukulele more suited to crooning which was becoming popular in the 1930s. (source: Wikipedia)