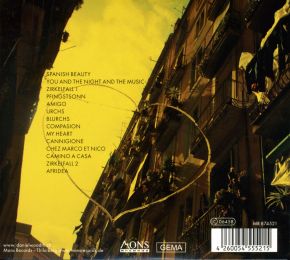 Since 2001, the Swiss trio of trumpet player Daniel Woodtli, guitarist Nick Perrin and bassist Lorenz Beyeler has been a well-rehearsed team. In their small chamber music formation, they present quiet, poetic, top-class and original compositions.
On “Triologia”, Daniel Woodtli’s repertoire leads you away to the Iberian Peninsula, with twelve of the fourteen tracks penned by himself. The music’s panorama unfolds beyond the traditional through a dense network of musical references that can be found in the spectacular landscapes of Spain and Portugal. Distinctive trumpet lines, sparkling guitar cascades that reflect the closeness of the sea, melancholy melodies, proud and sometimes even arrogant rhythms that allow you to feel the sun-baked plains, the temperament and experiences of the life pulsing through the cities.
The recording techniques which the three men from Bern used on the album are very special. They recorded it with a stereo microphone and a fifty-year-old tape machine, allowing the warmth of the pieces to be clearly felt and heard without compromising the sound quality.
Daniel Woodtli and his fellow musicians paint a picture of this amazing region that goes right under your skin!