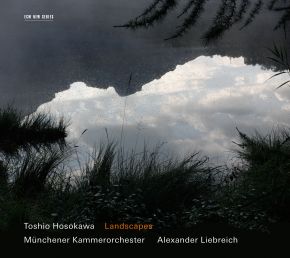 ECM’s ongoing series of recordings with the Munich Chamber Orchestra continues with an intriguing album of new and recent pieces by Japan’s leading composer Toshio Hosokawa.

Amongst the featured compositions are “Sakura für Otto Tomek” and “Cloud and Light”, both written in 2008, and “Ceremonial Dance”, written in 2000. These 21st century pieces are brought together with “Landscape V” (originally from 1993 and for string quartet, meanwhile expanded into an orchestral version)

Born in Hiroshima in 1955, Hosokawa was initially inspired by Western art music from Schubert to Schoenberg. He came to Germany in the 1970s to study with Isang Yun and Klaus Huber. As he strengthened his standing in European avant-garde he also put down deeper roots in Japanese traditional music. His work increasingly suggests a dialogue between East and West, between the archaic and modern, between ceremonial music and concert music. Hosokawa considers his compositional process instinctively associated with the concepts of Zen Buddhism and its symbolic interpretation of nature.

At  present Hosakawa is a name very much in the news in Europe, as his opera Matsukaze, with choreography by Sascha Walz, is at the Berlin Staatsoper and is receiving much positive media attention.

Landscapes is ECM’s second reckoning with Hosowaka: his music was previously featured on the critically acclaimed Yun/Bach/Hosokawa album of Thomas Demenga (ECM 1782), issued a decade ago.

Hosokawa’s involvement with traditional music led him to study the shō, the ancient Japanese mouth organ with 17 bamboo pipes. In contemporary music the best known shō player is undoubtedly Mayumi Miyata who is featured here. She was previously heard on ECM in Helmut Lachenmann’s “Das Mädchen mit den Schwefelhölzern”. On the present disc Mayumi Miyata solos in Hosakawa’s music for strings and shō, and plays unaccompanied shō on “Sakura”, Hosakawa’s adapation of a traditional Japanese piece.