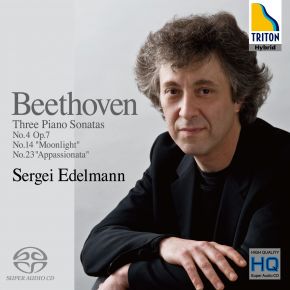 This is one of the series of new recordings performed by Sergei Edelmann, a re-known pianist who comes back, after a certain silence, to the recording industry like a shooting star. Featuring Beethoven's important sonatas including the most popular "Moonlight" and "Apassionata", Mr.Edelmann interprets all the movements as if he spoke to someone about stories, profoundly, with each single tone, none of which is left insignificant, gathering all together to constitute a whole drama elaborated by the composer.

The first three of Beethoven’s 32 mature piano sonatas were published as a set, Op. 2, in 1796. But the next in the series, Op. 7, stands alone, and bears the designation “Grande Sonate”, in recognition of its ambitious scale and its element of virtuosity. The work was written in 1796 and ’97, while the first two piano concertos were also in progress, and published in 1797 with a dedication to the composer’s pupil Countess Babette von Keglevics. [......].

The two Sonatas which make up Beethoven’s Op. 27 were composed in 1801, between the First and Second Symphonies, and published in 1802. They must at one stage have been intended for separate publication, since they have different aristocratic dedicatees: the second is inscribed to Countess Giulietta (or Julie) Guicciardi, a young piano pupil of Beethoven whom for a short while he seems to have hoped to marry. But the two have the same sub-title, “Sonata in the manner of a fantasia”. In the case of No. 1, this indicates a novel combination of the multi-movement sonata and the much freer, continuous fantasia. No. 2, however, is in three complete and self-sufficient movements, albeit without a break between the first two. Its chief element of fantasy comes in the placing of a slow movement at the start, and in the unconventional nature of this Adagio, which prompted the work’s poetic nickname of “Moonlight” Sonata. [......]

Beethoven’s Op. 57 Sonata was written in 1804 and ’05, as part of an extraordinary sequence of masterpieces which also included the Eroica Symphony, the Triple Concerto, the Fourth Piano Concerto, the three “Rasumovsky” string quartets, the Fourth Symphony and the Violin Concerto. The work was published in 1807 with a dedication to the composer’s friend Count Brunsvik. It seems to have been the publisher who gave it its title of Sonata Appassionata; but Beethoven is not known to have demurred, and neither has anyone since, for there can be few more “passionate” sonatas in the repertoire. [......]
(from the CD linernote by Anthony Burton © 2011)