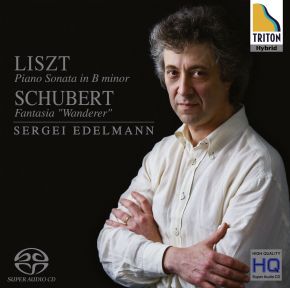 This disc performed by Sergei Edelmann, a pianist of music maturity as well as of splendid virtuosity, features two big masterpieces for solo piano by Listz and Schubert, closely related each other.

Liszt was the supreme nineteenth-century master of the piano, and in many of his works pushed the technical and sonorous possibilities of the instrument to new extremes. His most important single composition for solo piano, and perhaps his greatest masterpiece, is the Sonata which he completed at Weimar in February 1853. It was published the following year, with a dedication to Robert Schumann, who had dedicated his Fantasy to Liszt some fifteen years earlier. But it was slow to gain approval, receiving only private performances – including one given to Richard Wagner, who found it “beautiful beyond belief” – before it was finally played in public in Berlin in 1857 by Liszt’s pupil (and later that year his son-in-law) Hans von Bülow. That premiere was coolly received, and for some years after it the work continued to baffle audiences and many musicians; it was not firmly accepted into the repertoire until well into the twentieth century.
The main stumbling-block to appreciation of the Sonata must have been its unconventional form. It consists of a single movement lasting over half an hour, in a greatly expanded sonata-form scheme, incorporating a slow movement and a fugal scherzo, and all derived from no more than a handful of themes. It is in some ways the pianistic equivalent of the orchestral symphonic poem, a form of which Liszt was the pioneer – with the significant difference that it has no stated programme. Commentators have attempted to match it to various narratives, including the legends of Faust and of the Garden of Eden. But Liszt was not normally shy about attaching programmes to his music, so we must conclude that he wanted the Sonata to be heard as an abstract composition – or at least, in view of its intense expressivity, as a projection of personal states of mind to which a story-line cannot readily be attached. […..]
One of the few models for Liszt’s conflation of four movements into a continuous and unified whole was the Fantasy in C major by Schubert, which Liszt had frequently included in his solo recitals in the later 1840s, and had arranged for piano and orchestra in 1851. The Fantasy may initially have appealed to him as Schubert’s only solo piano piece to have been conceived as a virtuoso showpiece. (Schubert himself had only a modest technique: there is a story that when he attempted to play through the Fantasy, he gave up, exclaiming “Let the devil himself play it!”) The work was written in November 1822 – around the same time as the Unfinished Symphony – for a wealthy patron named Emanuel Karl Liebenberg de Zsittin, who had been a pupil of the pianist-composer Hummel. Liebenberg presumably also paid for the work’s publication in 1823. [……]
(from the CD linernote by Anthony Burton © 2011)