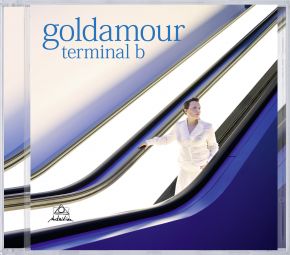 Terminal B is a musical trip into the inner being, the heart and soul of a woman. The woman is sitting in the waiting hall of Terminal B at EuroAirport Basel-Mulhouse-Freiburg on a Sunday morning. She is drinking coffee and reading the paper. She has a standby ticket in her bag. Will she get on the plane or go back home, a home, which she actually wanted to leave? The thoughts and feelings of this woman are made audible by the international band members of the project Goldamour. In addition to the Anglo-Catalan Steve Argüelles, who lives in France, and the Dutch pianist Jasper van't Hof, the group is composed of the singer Elodie Lauton from Montpellier and Felix Graf (piano, programming) and bassist Peter Borföi, both from Basel, Switzerland. Goldamour is not just a patchwork family project with respect to its members. Very different music styles are also interwoven to capture the inner turmoil and mood swings of this fictive person adequately. For example, we hear elements of chanson, jazz, pop, samba and trip hop, at times acoustic, at times defamiliarized electronically. But how beautiful it is that the music can stand alone here – the story is only imaginary, i.e., as a movie in your mind. It need not subordinate itself reservedly to a powerful feast of visual impressions, but instead is present homogenously and extremely compact, contrary to many film soundtracks. Among other things, you can recognize this by the fact that the pieces often follow one another without breaks; instead, they have one continual, suite-like flow. This flow is only interrupted by the half-time break "On the Tip of My Tongue", which Terminal B divides into two parts like a tribute to the old long-playing record times.  Elodie Lauton not only wrote all lyrics, but also creates a context with the sound of her striking, charming voice for this well brought-up bastard. Even if Terminal B makes any classification of their music impossible, "chanson-pop of the demanding sort" sways above it with shining letters. The nice-sounding, (never too) catchy melodies are that which remain most in your mind after listening to the complete album.