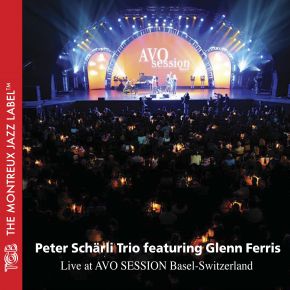 As a ten year old Schärli started to play the trumpet. Already during his apprenticeship as a clerk, he took lessons at the Jazz School in Lucerne. While working as a clerk in an engineering factory, he joined in 1974 as a singer, pianist and trumpet player with the blues band "Exodus" on. on. Between 1977 and 1981 he attended the "Swiss Jazz School" in Bern, where he graduated with a diploma, it was at this time on projects with Urs Blöchlinger and John Wolf Brennan. With Marco and Thomas Käppeli, he founded his own trio in 1982, which he then in 1984 with Hans Koch and guitarist Giancarlo, or saxophonist Roland Philip, expanded to a quintet (1987 Montreux Jazz Festival, Album Snip-snap 1986). From 1988, it comes to international tours with his quintet, which still regularly collaborates with Glenn Ferris as a guest musician (Germany, France, CIS, India, then Austria and Latin America) and several album recordings. In 1994, the Peter Schärli Special Sextet was formed with Ferris, Tom Varner, the thirsty, the pianist and drummer Hans Feigenwinter Béatrice Graf, he also accompanied the singer Sandy Patton, among other things on his albums, founded in 1991 with Patton and the guitarist and singer Antonia Giordano. He also appeared with Hazy Osterwald, Co Streiff, Hans Kennel, Gabriele Hasler on, Dom Um Romao, Werner Lüdi, Rick Margitza, Paul Rutherford, Tommy Meier, Saadet Türköz, Gerry Hemingway and Charlotte Hug. He also worked in various circuses such as Circus Theatre "Federlos".