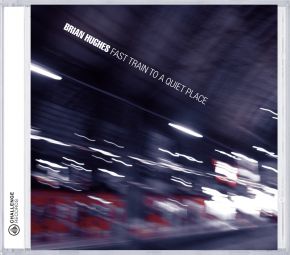 Fast Train To A Quiet Place

The train gets rolling with the bustling and percussive, stop and start motion that drives the opening track and first single “Fast Train,” which builds slowly towards a blistering, hypnotic crescendo. The sensual and dreamy “Blanket of Stars” was inspired by Hughes walking out of the studio looking up at the sky on a perfect night in his hometown of Altadena, California. The quirky working title of “Would You Like Fries With That My Dear?” somehow stuck to a sizzling track that spins bossa nova into such a frenzy that Hughes began to call the vibe “Rockanova.” After the blues tinged tropical romance of “You & I,” Hughes ventures into spy movie territory with the cool and bluesy, samba/boogaloo piece “Gotcha.” Rodhe brings out the classic soul-jazz via the Hammond B-3 on the funked out “Super Tight,” which features Hughes’ bright, blistering electric guitar. The inspiration for the title of the acoustic driven flamenco jam “Café Sin Nombre” is the place in Sevilla where flamenco is supposed to have originated. Fast Train To A Quiet Place wraps with a three songs with roots in very different places. Following an exotic venture to India via a romp on the electric sitar on the moody, atmospheric “The Gift,” Hughes goes “To A Quiet Place” with a graceful interlude on the bouzouki. He then heads back home—down home—for a fiery, anthemic electric guitar driven gospel explosion appropriately named “Hallelujah.” Jonathan Widran