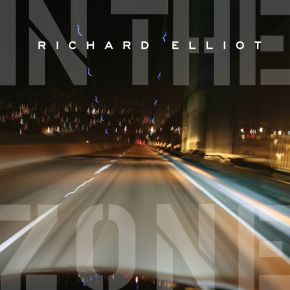 The reigning merchant of Soul Jazz, Richard Elliot invites loyal fans and newcomers alike to celebrate 25 years since the release of his debut album Trolltown. Where’s the party? Where else—In the Zone, a grooving, funked up, horn splashed collection that finds the energized-as-ever tenor saxophonist paying homage to the pioneering instrumental artists of his formative years (‘70s-early ‘80s) whose brilliance and musical innovations inspired his own. Drawing on the influences of legends like Grover Washington, Jr., Bob James and David Sanborn, Elliot fashions the perfect contemporary jazz complement to Rock Steady, his 2009 recording that was inspired by the great R&B artists he grew up listening to; that collection debuted at #5 on the Billboard Jazz Album chart and remained on the list for over 40 weeks.In The Zone includes a simmering, hypnotic retro-soul cover of “Inner City Blues (Makes Me Wanna Holler),” a Marvin Gaye staple whose original instrumental version marked Washington’s first session as a leader. Beyond that, the collection is driven by 9 powerful retro-flavored original songs penned by Elliot and co-producer Jeff Lorber, who share a colorful collaborative history over the past 10 years. The two played numerous shows in the early 2000s as part of the all-star Groovin’ For Grover tour (with Gerald Albright and Paul Taylor) and have worked together on various tracks on Elliot’s recordings Crush (2001), Ricochet (2003), Metro Blue (2005), RnR (Elliot’s hit dual 2007 recording with trumpet great Rick Braun) and Rock Steady.