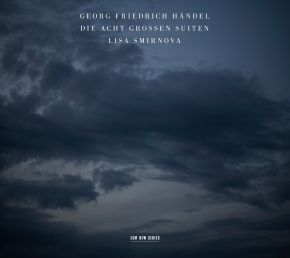 ECM New Series debut for the exceptional pianist Lisa Smirnova, playing Händel’s Eight Great Suites (1720), also known as “The Eight London Suites” or “Suites de Pièces pour le Clavecin” – by any name, major pieces in the keyboard literature. The 1720 edition of suites – MWV 426-433 – is considered by many the most important collection of Händel’s early works. Published by the composer himself, it includes works from both his Hamburg and English periods, all extensively revised by the composer, right through the printing process. Outstanding artists from Glenn Gould to Keith Jarrett have been drawn to Händel’s suites of 1720, but there are very few recordings of all eight, either on piano or harpsichord, currently on the market.

Smirnova (born 1972, in Moscow, currently living in Austria) opts for the modern piano. She had been working rigorously on the 8 Great Suites for five years prior to undertaking this recording, making many discoveries.