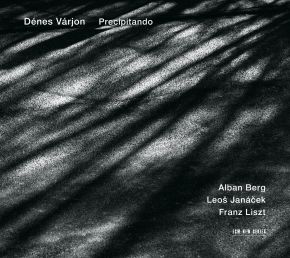 Alban Berg: Sonata op. 1
Leoš Janáček: V mlhách  (In the mists)
Franz Liszt: Sonata in b-minor
“Perhaps it is the lustre of Dénes Várjon’s playing that lifts everything he performs here into a state of newness, of beginning, and thereby directs our attention to how, in all this music, beginnings are crucial and, once made, decisive.” So begins Paul Griffiths’s liner note for the first solo recital recording by Dénes Várjon. It is a recording that brings the music of Franz Liszt into juxtaposition with work of two composers inspired by him. As Várjon says, “It is always highly interesting to find connections between composers, and bridges between epochs in musical history. In the mirror of other composers and periods, I begin to see new dimensions of works which I have performed, and this is especially the case when I play pieces by Ferenc Liszt.”

For Várjon, the importance of Liszt transcends the piano and his vision of its possibilities. “Even more strongly, I see him as a main figure of the current of music history. There are certain works by him I need to play and explore again and again - especially his enigmatic late piano pieces, including the four Valse Oubliees and the Mephisto Walzes, the A major piano concerto and, most importantly, his B minor Sonata. I feel the Sonata is a most essential and pure manifestation of the art of Ferenc Liszt. For all its rich texture, its great structure and its length, there is not one single note which is not a most important part of the whole.”

Playing Liszt in context with Berg’s Piano Sonata and Janáček’s “In the Mists” offers further insights. “I hear of course the echo from Liszt's music in Berg and Janáček but even more I realize, through the latter composers, the new and the modern in Liszt's work. The harmonic world of Alban Berg opens the ears to all the innovative solutions of Liszt, and the one movement shape of the Berg Sonata gives new perspectives on just how modern it was in Liszt's time to compose a piece like his B minor sonata. I also don't see it as a contradiction that while I hear the modern side of Liszt, the Berg opus 1 is also a very romantic piece for me.” Written around 1907, while Berg was under Schönberg’s tutelage the piece is also indebted to Mahler and Debussy as well as to Liszt. Paul Griffiths points to similarities between the Berg sonata and Janáček’s “In The Mists” of 1912: “the influence of Debussy, the extending but not breaking of tonal harmony, the motivic consistency, the constantly vocal utterance ….”

Várjon: “The expressivity of Janáček’s parlando is very similar to that of Béla Bartók. Though I don't speak Janáček’s language, through my knowledge of Hungarian folk music, I’ve always had an affection for this very special music and a connection to it. I find him one of the most unique composers.”