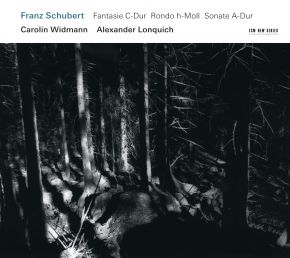 This insightful recording of Franz Schubert’s music is also a first documentation of the musical alliance between violinist Carolin Widmann and pianist Alexander Lonquich, which has been gathering momentum over the last four years. They first came together to play Messiaen in Salzburg in 2008. The following year a Lonquich solo recital in Rome convinced Widmann that they should collaborate on Schubert’s music for violin and piano.

In this album, recorded at Historic concert hall Reitstadl Neumarkt, the duo plays the C-Major fantasy of 1827 and the Violin Sonata in A of 1817, as well as the B minor Rondo of 1826. If the influence of Beethoven is still marked in the 1817 sonata, the 1826 and 1827 pieces remain striking in their originality. Written at the request of Viennese virtuosi Josef Slawik and Karl Maria von Bocklet, they are pieces that transcend ‘mere’ virtuosity. Lonquich describes them as “paradoxical”, compositions conceived as technical which nonetheless feel “thoroughly metaphysical”: “Schubert is music’s great Wanderer. He goes through highs and lows and subtle harmonic progressions. He’s invariably spoken of as the great writer of melodies, yet there is always extraordinary harmonic tension at work as well.”

Carolin Widmann: “There is ambivalence in Schubert: pain and beauty expressed with the same intensity. I can hear the Austrian countryside in his music when I’m playing and at the same time this feeling of reaching for the heavens. Great art is made out of this combination of rootedness and transcendence…”

Widmann and Lonquich’s empathetic reading casts aside conventions of violin and accompaniment, responding instead to the changing needs of Schubert’s music. Lonquich: “Through the insistence of Schubert’s rhythmic language, one often doesn’t know which instrument is taking the leading role. There is a continual shifting of emphasis which almost reminds me of Ligeti. What’s fascinating in the duo playing is the feeling that we must follow the same direction yet not draw too close together, develop the same breath, yet also retain our autonomy.”