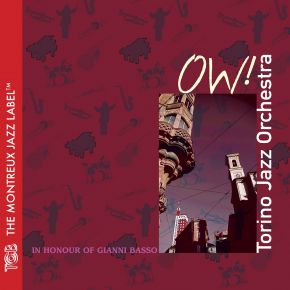 This record, whose title ‘Ow’ shares the same name of the well-known song composed by Dizzy Gillespie, is the expression of the sound of the Torino Jazz Orchestra, one of the most active jazz orchestras in Italy today. It is, in addition, an invitation to listen and share the individual and creative path of this jazz team, originally founded by Gianni Basso and now directed by Fulvio Albano, as it grows to be the charismatic symbol of Turin, the city that has contributed most to the making of early Italian jazz.

‘Ow’ offers a unique anthology of songs that pays tribute to Gianni Basso, who was the historic leader of this Big Band for over 30 years. Completed just one year after his death, ‘Ow’ features songs artistically characteristic of the ensemble: original pieces written by both Gianni Basso himself, as well as trumpet player, composer-arranger Dusko Goykovic, one of the more active collaborators of the orchestra. In addition it includes historical big band scores which were donated over the years by renowned international artists (including Slide Hampton, Darmon Maeder, and Thad Jones).