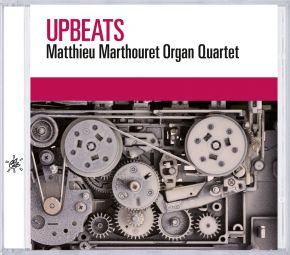 The legendary concept album "The Wall" by the British band Pink Floyd was released in 1979 – and Matthieu Marthouret was born in the same year. The cross reference makes sense, because the Frenchman repeatedly emphasizes the fact that his music is not created in a void, but instead consistently takes current influences into consideration. Even if you want to assign the label of "modern contemporary jazz" to him in the most far-ranging sense of the word, the compositions always let the grooving, rhythmic elements of rock and pop, the clear melodic character of folk, but also the subtle nature of classical works shine through. Even though Marthouret has always had a deep affection for the legendary albums of the 50s and 60s – above all, on the Hammond organ – and likes to refer to the "Blue Note" albums, his nine original compositions on "Upbeats" sound timeless and fresh. The quartet with top-rate members already released its first album in 2009 ("Playground") at the French label Must Records and immediately reaped a lot of praise in the press. The successor with the same band members has become more straightforward and substantial; the long years of playing together has resulted in an effortless, completely  unpretentious, easy-going and grooving recording with a masterful, homogeneous band.