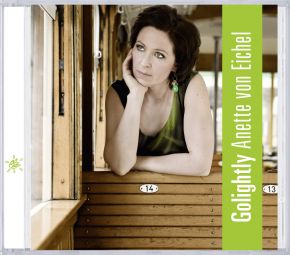 Who doesn't know it, the movie from 1962 awarded Oscars and Golden Globes? Of course, it is Breakfast at Tiffany's. The film music, awarded a Grammy, was composed by Henry Mancini, and the title song "Moon River" became the most well known of the pieces. The movie is based on a short novel by Truman Capote, who however had a different plot – and a considerably different end.
Anette von Eichel described how she got the idea to provide the main character Holly Golightly with her own world of music as follows: "I took a trip on a train a while ago. When I arrived at the station, I realized that I didn’t have anything to read with me: no book, no newspaper, nothing. So I stepped into the nearest bookstore. There was a little book that immediately caught my eye because of the beautiful smiling face on the cover, Breakfast at Tiffany’s by Truman Capote. I guess anyone who reads the title can imagine the book cover I saw in front of me. And though I know that you should never read the book once you have seen the movie, I bought the short novel and got on the train. What shall I tell you: I loved it from page one. I especially loved the heroine with her card: ‘Miss Holiday Golightly, Traveling’ and all her ideas about life and happiness that were at once funny, romantic, melancholic and also at times rather wild. I loved her sense of independence and the open end that the story has: Holly takes her trip to Brazil and is never seen again. "The story and Holly Golightly intrigued me so much that I decided to make a sound-portrait of her character." In doing this, however, she does not use Mancini's music – with the exception of "Moon River" – but instead pieces that seem to be customer-tailored for Holly Golightly, regardless of whether they are standards such as "Moonlight in Vermont", "Speak Low or her own compositions. She created a fantastic blend of nostalgic, dreamy sounds and sassy, rebellious gems.