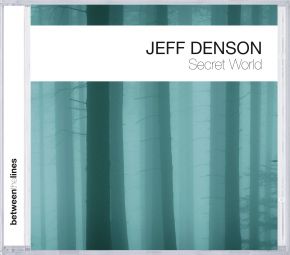 Colors, structures and pictures that touch him emotionally: these are the initial sparks that inspire Jeff Denson when he composes new pieces. They form groups around him and consolidate into an imaginary "Secret World". Sound for sound and harmony for harmony, his pieces are created from this imaginary point. At the end, there is a work that entices the listener to enter into Denson's world. The listener encounters the inspirations there, which once triggered the compositions: a waterfall here, a sunset with all of its bright, shimmering colors, autumn leaves there, and forests covered in mist. Of necessity, an unadorned groove or a simple melody line does not suffice to go along with that, and the restriction to one style or genre is doomed to failure. As a result, the mosaic of the "Secret World" is composed of the colorful pieces that jazz and contemporary classical music, R&B and Blues, pop music and old chamber music supply. This is touching, powerful music, which develops a magnetic attraction. Jeff Denson is nothing less than a complete musician. His diplomas in Berklee, Florida and San Diego – each time with distinction – as well as his numerous prizes have made him into one of the bassists in the current scene most in demand over the past decade. However, his qualities as composer in various styles have also resulted in composition jobs, from pieces for solo bass all the way to chamber opera. But above all his concerts and recordings have made him known internationally: as bassist and co-leader in "Minsarah" as well as in the "Lee Konitz New Quartet", with whom he is currently on a world tour. His solo performances or duos with the Swiss Claudio Puntin also call attention to him. His debut as leader at "Between the Lines" contains yet another surprise: Jeff Denson has a variable and expressive voice! There is another joyful reunion at "Between the Lines´" with Ralph Alessi, who also had his international debut there. His lyrical playing with a powerful sound has been noticed by many in the meantime, and his is one of the most important trumpet players in jazz today. He fits into Jeff Denson's world like a piece in a puzzle – a really perfectly matched musician for this project!