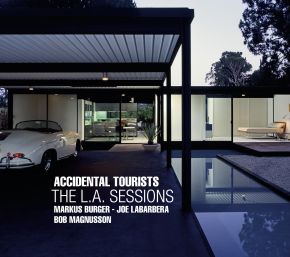 The 1935 Gerschwin classic I Loves Porgy, a featured track in the album, is not only one of Burger’s favorite standards but also his personal homage to his idol and strongest musical influence, jazz legend Bill Evans, who recorded the tune in the early 1960s. “Here’s where the album comes full circle for me”, Burger says, as the track features the melodic mastery of none other than Bill Evans’ own drummer, Joe LaBarbera.  LaBarbera tackles the ballad with his legendary use of wire brushes and a strong sense of time and space, all of which have come to define his musical style over the years and earn him much acclaim from the musical community at large. “Joe has that European sense of space that is part of my musical identity, but he still sticks to his American jazz roots and swings like nobody’s business”, Burger says.
The album closes with the track One World, by Berlin guitarist Thomas Hopf. Burger first heard the tune while playing with Hopf back in 2002, and immediately added it to his list of favorites for its “peaceful and holistic qualities”, he says.

Markus Burger (composer)More information
02-04-2013 Jazzenzo
"The musicians play the notes effortlessly intertwine with each other: it becomes a round whole."
22-03-2013 http://midwestrecord.com
"A winning set throughout that jaded ears will embrace."
22-03-2013 http://www.tomhull.com
"a nicely balanced, engaging set"
06-03-2013 Downbeat
"Dynamic variation and the shifting roles of soloist and accompanist continually gratify. Burger's admirable use of space lets Magnusson and LaBarbera bubble up from within the ensemble ... a great blessing to pianist and listener alike"
01-03-2013 Pianowereld
"The L.A. Sessions get better with each play.
The interplay [drummer (Labarbera) and bassist (Magnusson)] with pianist Markus Burger is exemplary."

01-03-2013 Downbeat
"Brawny bass tones undergird the ensemble like strong, pliable floor joists and LaBarbera engages in exciting metric dialogue on rhythm tunes. "
29-10-2012 All About Jazz
"... infectious, well-crafted compositions played by a stellar trio."
23-10-2012 I Dig Jazz
"... an unbelievably good trio jazz album"
17-10-2012 BeBop Spoken Here
"Markus Burger is, like so many of today's jazz people, classically trained and it shows in his impeccable renditions of his own and other's compositions."
16-10-2012 Audiophile Audition
"All in all, this is a remarkably good outing..."
10-10-2012 Critical Jazz
"New sounds... There is nothing that excites me more than stumbling on to an artist that has taken the time to develop their own voice."
04-06-2012 All Music
""Morning Smile" is an elegant ballad that closes the album, leaving the listener wanting more."