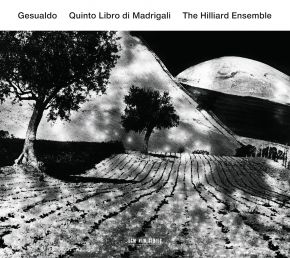 A wonderful new cd of the worldfamous Hilliard Ensemble,consisting of purely Renaissance music of composer Gesualdo.

An aristocrat who forged an idiosyncratic style of musical expression, Don Carlo Gesualdo, Prince of Venosa, was one of those composers in music history who can truly be described as being ahead of his time: the creator of a harmonic language bold almost to the point of anarchy, whose every unpredictable interval was viewed with suspicion by the opponents of musical autonomy and guardians of liturgically based sacred music. A friend of Torquato Tasso and founder of his own academy, to which many leading madrigalists of the 16th and early 17th centuries belonged, Gesualdo was a highly expressive composer and a virtuoso performer on the bass lute. Yet his chromatic progressions baffled his contemporaries and had to wait until the 19th-century era of High Romantic period to find artistic parallels. Among his most important compositions are six books of five-part madrigals dating from between 1594 and 1611. The last two books in particular – this recording by the Hilliard Ensemble brings new performances of Book 5 – display his dissonant musical language with its extreme harmonic disruptions, striking tempo contrasts and a distinctly modern feel for drama. The Hilliard Ensemble’s expressive singing, here also featuring soprano Monika Mauch and countertenor David Gould, conjures up that sound described by the great music historian Hans Redlich as growing out of “the antithesis between extravagant/debauched eroticism and self-castigating longing for death”.

Don Carlo Gesualdo (composer)More information
22-12-2015 NRC Handelsblad
"["].. Gesualdo, the Neapolitan prince who killed his wife and her lover and who left us styptic music , is still a source of inspiration four centuries after his death . This album brings string arrangements of two of his madrigals together with contemporary spin- offs from Estonia and Australia.""