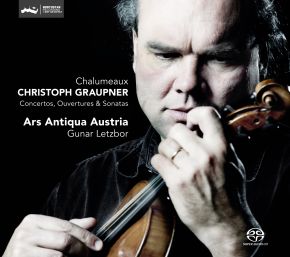 He was a contemporary of J.S. Bach and J.J.Fux but his name is not well-known because his employer Ernst Ludwig obliged him to the function of Kapellmeister in Darmstadt: Christoph Graupner. The composer never visited Vienna in his life!
Ernst Ludwig secured the lifelong stay of Graupner in Darmstadt in 1723, by a substantial salary increase, which made him, as a court conductor, the highest paid orchestral-leader of his time and prevented at the same time that he migrated to Leipzig, where they had offered him the post of cantor. After that another 37 years followed in the service of the court in Darmstadt. Graupner eventually went blind in 1760 and therefore in the last six years of his life, was no longer actively conducting the orchestra.

The instrument chalumeau is in the spotlight on this new album of Ars Antiqua Austria, with music of the Austrian composer Graupner. The chalumeau was probably developed in the late 17th Century by the Nuremberg instrument builder and inventor of the clarinet, Johann Christoph Denner (1655-1707) and was structurally and acoustically optimized in such a way that it has been used by many composers of the Baroque period and the early (pre-) classical music period, for concerts, suites, arias and chamber music. The chalumeau is forerunner of the clarinet, but the two instruments existed parallel to each other in the 18th century. It was not until the late Baroque era the loud and powerful baroque clarinet became the more popular one and the chalumeau slowly disappeared from the musical scene.
Christoph Graupner is considered one of the most important composers for chalumeau. He knew how to use the instrument skillfully -despite its limited tonal range - for sacred and secular music, and he can be seen as one of the most innovative composers and sound experimenters of the 18th Century.

Gunar Letzbor (conductor)More information
29-08-2013 Florilegium
"This is the art of interpretation on its highest level"
01-10-2012 Music Web International
"This is an excellent programme which is full of life and variety."
09-09-2012 Independent on Sunday
"Garupner's overtures and concertos are duskily attractive, while the violin sonatas have Italianate verve"
01-08-2012 Klassieke zaken
"Extremel lively and provocative music"
15-07-2012 The Observer
"well-recorded disc"
hifi & records
"A discovery!"