The code is valid one time and valid for a 10 days after receiving the promotioncode. Your emailaddress will only be used by Challenge Records International and will not be given to 3rd party advertisers. If you have any questions please contact us.
TITEL CD is added to your cart.
1184071310 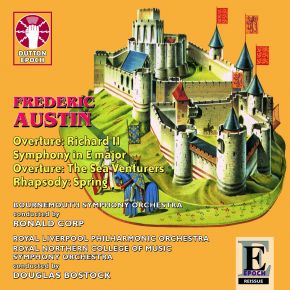 As a coupling for their new recording of Frederic Austin’s romantic overture Richard the Second with the Bournemouth Symphony Orchestra, Dutton Epoch have reissued tracks from three different earlier recordings, all brilliantly remastered, to assemble a remarkable survey of orchestral music by the great English baritone, Frederic Austin, who was also a notable composer. Austin’s big-boned Symphony of 1913 almost certainly influenced his friend the young Arnold Bax, while the colourful orchestral tone painting in the overture The Sea Venturers adds yet another vibrant musical sea picture to the repertoire. Both are vividly played by the Royal Liverpool Philharmonic Orchestra under Douglas Bostock. The programme is completed with Austin’s delightful nature poem the Symphonic Rhapsody Spring, a success at the Proms in 1907. They make a cherishable sequence, which reveals yet another British composer who had been eclipsed, but proves very much to have had something to say. If you like Bax or early Frank Bridge, this is a terrific discovery.