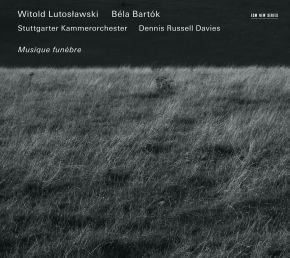 Dennis Russell Davies has had a long-running and highly productive association with the Stuttgart Chamber Orchestra – documented on exceptional ECM recordings of repertoire from Mozart to Kancheli - and is currently the orchestra’s Conductor Laureate. Here he leads them through spirited performances of Bartók’s “Divertimento”, “Romanian Folk Dances” and “Seven Songs” (on which the orchestra is joined by the Hungarian Radio Children's Choir.) This selection of lively Bartók pieces is viewed through the prism of Wittold Lutosalwaski’s “Musique funèbre”, written in memory of the great Hungarian composer, and first performed on the 10th anniversary of Bartók’s death. It’s an important, and moving, piece (and one which also led to international recognition for Lutoslawski).