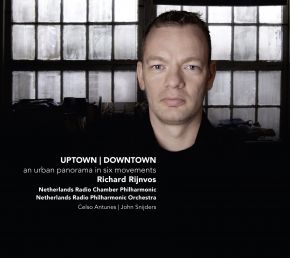 Richard Rijnvos (1964) likes to listen to masters from previous centuries: Beethoven, Janáček and Sibelius are favourites. Still, there is a great difference between the Romantic composers’ methods and his. Rijnvos himself says: “The classical idea of a composer is that he has the music in his mind and puts it on paper. I have nothing in my mind, yet I still want to compose. I’m interested in music that arises when you put certain conditions together and then see what happens.”

From Rijnvos’ descriptive titles, usually referring to cities and other places, you would not suspect that his method is so radically abstract. However, he is a composer who generates tones from non-musical or numerical sources, such as chess boards or magic squares. Someone who also loves to endlessly pile single-voice lines on top of each other. That strict, “impersonal” method leads paradoxically enough to sensual works with a non-Dutch signature.

“The less ideas a composition has, the stronger it gets", this is a statement of Morton Feldman and this is a beloved motto of Rijnvos. One can not put him in a box because each composition opens new sound worlds for his listeners. With the utmost precision he works on his oeuvre that unfolds himself like one grand novel. The most of his works are linked together in a series. Rijnvos composes for solo instruments as well as for small ensembles. Besides that he composes for symphony and chamber orchestra.