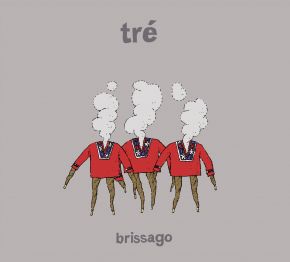 Once upon a time in February 2006: a Swiss band, a trio, appeared for the first time with their “Fundamental Music" to represent their country in the series” Jazz thing Next Generation". Since that time, another CD "Karpfen in Wilhemsdorf" has been released at Double Moon Records as well as one at the Swiss Migros-foundation. Bernhard Bamert also created a short cartoon, which was shown in Swiss movie theaters and received several awards. The new CD has a title, which is not even understood by everybody in Switzerland. "Brissago" is the name of a small Swiss village at Lake Maggiore, shortly before the border to Italy, with barely 2000 inhabitants. But Brissago is also the name of a cigar that comes from this village, from a small cigar factory that was founded in the 19th century. And its shape defies any sense of a pattern: thin, slightly spiral-shaped, much too long for its thickness with grass stem channel – and no cigar is like another. This also describes the characteristics of the trio's music: unique, unusual and slightly crazy. The three Swiss Alps anarchists with their great joy in dismantling, shattering and putting back together anew take everything from rock to folk music, anything that they find along the way, and mix it all in their band mortar. They compose new pieces from that, which – although they remind us of their initial elements – are a lot more fun. These miniatures rarely run for more than two minutes, sometimes even less than one minute. Music essence, to put it another way. Above all, Alpine tradition flashes through time and again, an enjoyable encounter with their own culture, which then flows into songs such as "Grünes Gras" (Green Grass), "Nutztierdruck" ("Cowshit Blues") and "Lachnummer" ("Big Flop").