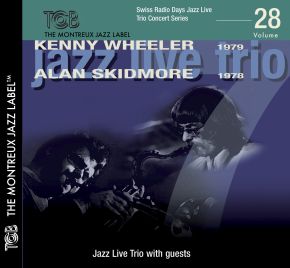 As of the late sixties thru the mid-eighties many international Jazz musicians from around the world passed through at the radio in Zurich, to perform concerts, backed by the Swiss Jazz Live Trio and recorded by Swiss Radio. Here is another historic document which shows what was happening during that particular period in Switzerland. Volume 28 features Kenneth (Kenny) Wheeler, Canadian, born Jan.14th 1930 at St. Catherine, who has studied at the Toronto conservatory. With Britain as a base, he became one of Europe’s most formidable and in-demand trumpeters, enjoying an international reputation. Alan Skidmore, one of the top musicians from the UK, is the tenor saxophonist on tracks 3 to six. His relation to Switzerland stems from various participations with the George Gruntz Big Band. The first set was recorded in 1979, the second one 1978 and the third set 1980.