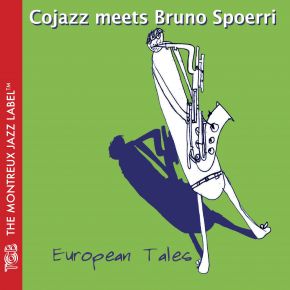 The Swiss Cojazz Trio exists since 1988 and there are already a few Cojazz CDs released on TCB. Andy Scherrer, Isla Eckinger and Peter Schmidlin, all 3 born in Basle, Switzerland, know each other already since the sixties and have played a lot together during almost 50 years now.
Saxophonist Bruno Spoerri, also born in Basle, is also playing since the sixties and it was him who had the idea to produce this CD. He suggested using exclusively European titles. The result is a very relaxed session with a few known and some less known melodies from different European countries. This is a happy CD for happy people.

Ted O’Rilley, writer of the liner notes says (excerpt):
A favorite magazine cartoon showed a band of young musicians in a studio, with the producer suggesting "Let's do one more take, with more emphasis on tone, harmony, melody, rhythm, tempo, musicianship, composition and originality."  That's not needed here.  These four artists have complete control of their craft, and have been showing it for five decades of international music-making.  Perhaps, as Swiss musicians at the crossroads of the European continent, they've had extra sources of inspiration……..