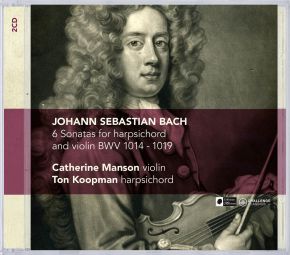 By departing in virtually every respect from the conventional model of the baroque trio sonata, Bach’s six sonatas for harpsichord and violin let both instruments participate equally in the unfolding of the thematic-motivic material. They establish a genuine dialog between the two performers as well and, thereby, actually pave the way for the classic duo sonata. The dialog between these two top musicians is equel and enchanting and the intimate nature of this recording draws the listener immediately in the music.

Bach’s violin sonatas, more properly called sonatas for harpsichord and violin, represent a closed set of six works and resemble in this way a number of similar instrumental work groups consisting of half a dozen pieces of the same kind. Take for example the six sonatas and partitas for unaccompanied violin, the six suites for cello solo, the six English Suites, or the six Brandenburg Concertos—to mention only a few. The concept Bach pursues in these work groups, however, does not aim at a cycle in the sense of a specific sequence in which the pieces are to be performed; it rather follows the principle of systematically exploring the manifold musical possibilities that can be realized in one and the same category of composition. Hence, the single works happen to form a whole, that is, a more or less closed set. If published it would constitute an “opus”, as Bach called the printed edition of his six keyboard partitas of 1731.

The most important feature of Bach’s violin sonatas consisted in their innovative scoring, an absolute novelty at the time of their origin and in many ways the prototype, on which the classical violin-piano sonata of a Mozart and Beethoven would be based. Even though the traditional elements of the Baroque trio sonata for two treble instruments and basso continuo can still be found in a number of movements or sections of movements where the violin and the right hand of the harpsichord form a duo structure over a bass fundament, the prevailing texture of the harpsichord part transcends the trio convention. In the six sonatas BWV 1014-19, the composer Bach single-handedly created a transformation of the genre of violin sonata.

Johann Sebastian Bach (composer)More information
30-05-2013 Early Music Review
"Ton Koopman's harpsichord playing, here matched by Catherine Manson in a likewise controlled and stylistically aware performance of the set, is always an inspiration – expresssive in sound an never dull or routine."
01-02-2013 BBC Music Magazine
"From the very start of BWV 1014, you can feel that this highly disctinctive duo has a good sense of admiration for Bach's inventiveness"