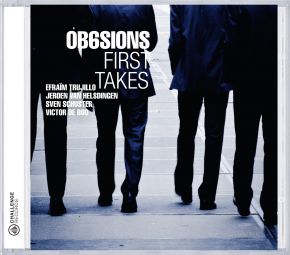 “About two and a half years ago I approached drummer Victor de Boo since we were going to start a new program with live music for Radio 6 Soul & Jazz. For ‘Mijke’s Middag Live’ I was looking for a band that would play every week in the program, ‘De Huisband’. No easy task, because I was looking for musicians that could play jazz and soul, who knew their standards, could build their own repertoire, but also could accompany guests: from young talents to the biggest international stars.

Victor de Boo searched and found: bassist and arranger Sven Schuster, whose compositions have a large influence on the repertoire of The Ob6sions, saxophonist Efraïm Trujillo who blows the bottom out of his horn in each solo and Jeroen van Helsdingen who conjures a variety of sounds from his keyboard. And of course The Boo himself, who plays the drums authentically and with a great drive.

On this CD you hear mainly own compositions and some standards, all recorded live on Radio 6 Soul & Jazz. It is a very uplifting album with the first takes the Ob6sions played on the radio now immortalized on CD!’ (from the linernotes by Robert Soomer, Producer NTR Radio 6)

Never heard this exciting sounds before.