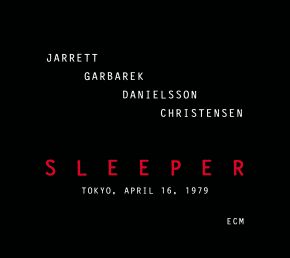 An astonishing double-album documentation of a great band at the peak of its powers, “Sleeper” features a complete and previously unreleased concert recording of Jarrett’s ‘European Quartet’, otherwise known as ‘Belonging’, at Tokyo’s Nakano Sun Plaza in April 1979. The pieces played, all composed by Jarrett, are “Personal Mountains”, “Innocence”, “So Tender”, “Oasis”, “Chant of the Soil”, “Prism” and “New Dance”. Exceptional improvisational exchanges, dynamic episodes of surging energy, and lyrical passages of wild beauty abound. The interplay between Jarrett and Garbarek is uncanny and the Danielsson/Christensen rhythm team swings wildly and delightfully. After more than three decades in the ECM archive, this “Sleeper”, newly mixed in Oslo, now awakes in all its glory.