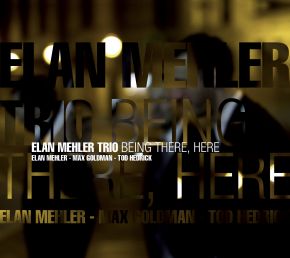 Elan Mehler – ‘Being There, Here’

Elan Mehler is a gifted young jazz pianist who is turning heads with his music. That’s not surprising because when he plays he creates the sonic equivalent of magic – something that world-renowned DJ, label boss, and talent spotter, Gilles Peterson, can readily attest to. While on vacation he first heard the six-foot-eight Israeli-American playing in a Swiss hotel at a spa resort and promptly added Mehler to his roster at the Brownswood label. Five years on and Mehler, who has three studio albums under his belt - 2007’s ‘Scheme For Thought,’ 2009’s ‘The After Suite’ and his 2010 collaboration with singer Adam McBride-Smith ‘Half Seas Over’– now makes his debut for the Challenge label with an acoustic piano trio recording.

‘Being There, Here’ captures Mehler’s threesome (Tod Hedrick on bass with drummer Max Goldman) playing in Therme Vals, Switzerland, the very spa hotel where the pianist was first ‘discovered’ performing by Gilles Peterson. The ambience of their surroundings – peaceful and reflective - is vastly different from a normal jazz club date and as a result Mehler’s largely introspective repertoire mirrors this fact. The set opens with a dreamy rendition of Duke Ellington’s immortal ‘In A Sentimental Mood.’ It’s the first of three classic Ellington songs that are present on the album - the other two are ‘Reflections In D,’ which is reconfigured as a meditative nocturne, and ‘Solitude,’ a haunting ballad that closes the album.

But Mehler isn’t a jazz musician whose repertoire is dominated by standards. The album’s title track was originally an acoustic guitar instrumental written by Matt Joy, a songwriter friend of Mehler’s based in Nashville, Tennessee (the two played together in a high school jazz trio and more recently, the pianist recorded Joy’s ‘Factory’ on ‘The After Suite’). It’s a reflective mood piece characterised by highly intuitive musical interplay from Mehler and his trio, which has been together now for eight years (Tod Hedrick, by the way, has played on all of Mehler’s previous recordings for Brownswood while Max Goldman was present on ‘The After Suite’ and ‘Half Seas Over,’).

More downbeat is ‘I Dream A Highway,’ a slice of atmospheric Americana written by alternative country stars Gillian Welch and David Rawlings and which Mehler first deconstructed on, ‘The After Suite.’ Here, the song becomes a hushed, stately hymnal that gradually builds in intensity and captures the spirit and stark simplicity of Welch’s original. By contrast, Mehler’s self-penned ‘Waltz Ferwerda’ – a swirling stream of sophisticated chords and dextrous right-hand improvisation rendered in a lively 3/4 tempo - shows another facet of the pianist’s musical character. On ‘Being There, Here,’ Elan Mehler and his trio acknowledge the jazz tradition while doing something distinctly individual – there might be faint echoes of Bill Evans, perhaps, or Keith Jarrett and Brad Mehldau in the DNA of Mehler’s music but he’s mature enough to be his own man. And he can make the piano sing – with grace, elegance, wit and an enchanting, hypnotic beauty.

-Charles Waring
Charles Waring is the jazz columnist for Record Collector and a regular contributor to MOJO magazine. He’s also written for Wax Poetics, Shook and Blues & Soul and is co-owner of www.soulandjazzandfunk.com

01-10-2013 Musicemotion
"He has the talent to carry anyone away with his play [...] Absolutely a must have!"
08-08-2013 UK Vibe
"The selection features some of the classic American songbook and beyond, plus some a contemporary Americana cover and one original piece. Overall there is a wonderful feeling of simplicity and economy of style about the trio with nothing ever rushed, and the empathy between leader Mehler, bassist Tod Hedrick and drummer Max Goldman is all too evident."
19-07-2013 The Jazz Breakfast
"Mehler and his mates also manage to play pretty music in a laid back way which nevertheless gets deep below the surface. A charming and rewarding listen, in short."
08-07-2013 Marlbank
"Mehler is a major talent although he is a modest person who probably doesn’t realise just how good he is. His gift is to channel atmosphere with a sensitivity and love of his material that shows in every note."
01-07-2013 Piano News
"A disc to enjoy, for a calm evenig with your loved and additionally a to the core unacademic lesson in Jazz."
05-06-2013 Audio Freaks
"The music, recording and the mastering deserve a big A !"
27-05-2013 Jazz Flits
"Elan Mehler is a very talented pianist. He creates a full, rich sound with minimal guidance."