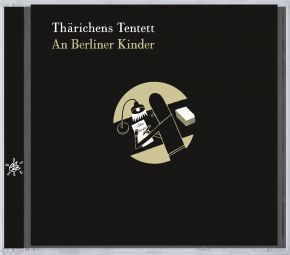 Nicolai Thärichen's playing has never been foreseeable or even predictable. And especially not when it is a question of his band Thärichen's Tentett. With the fifth album since the founding of the group in 1999, he again enjoys mocking all rules of the jazz police. And he engages in outrageous things, which he calls "German jazz art songs".  German lyrics in a jazz look? This has already existed in individual cases. But the weird sound poems of the Dadaist Hugo Ball alongside the malicious verses of Joachim Ringelnatz? Added to that, Bach's "Arie der Wollust" ("Aria of Vice") and a sonnet by Shakespeare? But still neither alarm due to trashy goods nor thrashed improvisations? Whoever knows Thärichen and his band also knows that the result remains far removed from academic "lyric and jazz". But what then? An ode to the children of Berlin, a bow to all doubters of undiminished aesthetics, a declaration of love to the German language and gleeful caustic treatment of the same, and the combination of all at the end with help of precisely the music that can master it too: jazz. Thärichen's compositions are custom-tailored to fit in, but his musicians above all know how to counter excessively cute arrangements with stormy solos, particularly the voice of Michael Schiefel. Of course, he is known as Germany's most experienced and variable jazz singer. But he still succeeds again in outdoing himself: from the bell-clear voice of an angel to bristling, mocking condescension – a cosmos of sounds rings out. The CD opens with a song ("Deutsch") that puts his doubts in the forefront: I find it strange when I sing in German – but that is pulverized in the further course of the song. In the next title song "An Berliner Kinder" ("To the Children of Berlin"), Thärichen weaves the sarcastic lyrics of Ringelnatz with a composition, which makes a total art work from the poem. Thärichen also knows how to put the ambience of the lyrics in to music in the other pieces on the CD, regardless of whether they are more of a satirical nature ("Der Schizophrene" [The Schizophrenic"]/Hugo Ball), permeated by deep sadness ("Abschied" [Departure] and "Totenklage" [Lament]/Hugo Ball, "Aus"/Joachim Ringelnatz), or enriched with a twinkle in his eyes ("Genau besehen" [Considered Precisely] and "Ferngruss von Bett zu Bett" [Long-Distance Regards from Bed to Bed]/Ringelnatz as well as "Seepferdchen und Flugfische" [Seahorses and Flying Fish]/Hugo Ball). A German translation of William Shakespeare's sonnet no. 87 takes its place here: a (hopeless) love poem. And a unique version of Bach's aria BWV 213, no. 3, in which it reads "Schmecke die Lust Der lüsternen Brust" ("Taste the delights Of a lascivious breast) (the lyrics were substantially changed in further use of the aria in the "Weihnachtsoratorium" [Christmas Oratorio]). An enormous challenge for Schiefel's voice and Thärichen's arrangement art! Both master the task brilliantly – really a musical gem!