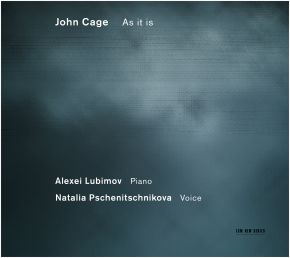 John Cage - As It Is

A fresh approach to one of contemporary composition’s most iconoclastic and inventive figures, issued on the occasion of John Cage’s 100th birthday. Early Cage is the subject here, strikingly original songs and piano pieces from the 1930s and 1940s. Songs in which Cage sets words by writers whose vision was as independent as his own – James Joyce, Gertrude Stein, E. E. Cummings. As Paul Griffiths writes, “The music exists in singing that has a raw, living edge, and it exists in piano tone that can be utterly simple and utterly remarkable. There is also a third presence that of the producer, bringing forward the extraordinary resonances that come from Lubimov’s piano, with preparation or without.” Lubimov championed Cage’s work in Russia and later had a close working relationship with the composer. He grasps both the playfulness of the music and its message of freedom. Recorded December 2011 in Zürich.

John Cage (composer)More information
10-03-2014 Kwadratuur
"ECM draws a fascinating combination of historical, musicological and poetic interpretation of the 21 beautifull songs which this record is rich."