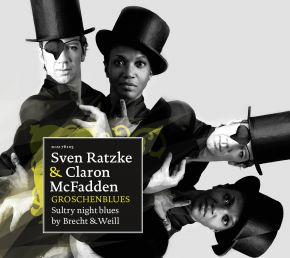 World famous soprano Claron McFadden and "infant terrible of showbizz" Sven Ratzke both wanted to exceed their limits: performance and cabaret, show and opera, jazz and blues: this cd is all that and more!

Groschenblues is a set of music by Kurt Weill and Bertolt Brecht; two pieces are by Weill and other lyricists. This theatre production (called Ich habe den Dreigroschenblues 2012) was initiated and produced by Ratzke, who also contributed some brief written interludes between songs. The two singers are accompanied by pianist Charly Zastrau (who wrote most of the arrangements), bassist Florian Friedrich, Tatiana Koleva on percussion and vibes, and Fay Lovsky on guitar, theremin, banjo and a musical saw.

The singing is mostly in German with a little bit of English. From the beginning, a dark version of “Mack The Knife,” the performances are quite haunting, theatrical and atmospheric, similar to the cabaret music heard in Berlin in the 1920s. Ratzke and McFadden take listeners through a variety of moods, depicting the underworld and the seamier side of Germany from the era. While much of the material is lesser-known today, even those who do not understand German will admire their singing and highly expressive style; Ratzke's style is a wild mix of cabaret, vaudeville and jazzy chansons. From melancholic chansons to hilarious conferences, Ratzke improvises all the way trough, from one extreme to the other. His shows emit a Berlin nightclub atmosphere and are affected by the twenties of the last century.

Claron McFadden (artist)More information
06-01-2013 Jazzenzo
"The brooding, abnormal eroticism and unadulterated lust of the three operas have remained intact, but because of the new arrangements by musical director Charly Zastrau who has lifted this music from the thirties to the now, McFadden and Ratzke can fully exploit their beautiful vocal abilities. And that's a lot!"
01-01-2013 Klassieke zaken
"Not only McFadden makes this CD worthwile. Ratzkes pianist Charly Zastrau deserves kudos for his original arrangements and to finish this list, Fay Lovsky is an multi-instrumentalist!"
01-01-2013 Audiofreaks.nl
"My conclusion; Recording and mastering an 9! Highly recommended"
20-11-2012 Mpodia
"Overall a great album for those who appreciate the work from Bertolt Brecht and Kurt Weill, but also for lovers of cabaret approach  from Ratzke with beautiful vocal work and musical highlights."